On March 23 we mark the 72th recurrence of World Met Day. The climate has dramatically changed over the last 70 years as shown by the latest IPCC report. With its dire warning about the impacts of climate change on people and the planet, the report was called “a damning indictment of failed climate leadership” by the UN Secretary General.

Yet, there is something to celebrate. At COP26, several countries committed to scale up their contribution to adaptation finance and to ensure that climate action is based on the best available science and data. In this context, the Systematic Observations Financing Facility (SOFF) was created by WMO, UNDP and UNEP to fill in critical weather and climate data gaps which undermine all adaptation efforts.

Since then, 14 Million Euros have already been pledged by the Nordic Development Fund (NDF) and Austria. The leadership of these initial partners shows that countries are taking seriously their commitments and “We expect more donor countries coming on board” said that Professor Taalas, WMO Secretary-General.

The theme of World Met Day this year is early action. The international community has made significant efforts over the years to shift from reactive response to proactive, forward-looking risk management approaches to extreme events and climate hazards. This allows saving lives and money.

Indeed, climate records show that while the number of disasters has increased five-fold over the past 50 years, the number of casualties has fallen significantly. Weather forecasts save lives every day, but we can do much better.

Investing in SOFF means improving the effectiveness of adaptation and climate action and tackling the problem at its roots. It is estimated that every dollar invested to fill the data gaps in data sparse areas in compliance with the Global Basic Observing Network will provide 25 dollars in socio-economic benefits.

“Adaptation saves lives. As climate impacts worsen – and they will – scaling up investments will be essential for survival.” said the UN Secretary-General at the launch of the IPCC Working Group 1 contribution to the Sixth Assessment Report.

But adaptation investments can only be as good as the data they are based on. That is why investing in SOFF means being part of the solution. 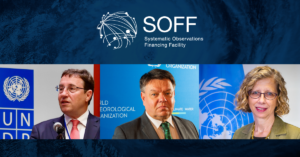